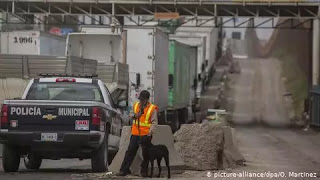 The United States and Mexico have signed an agreement to tackle illegal migration across their border, US President Donald Trump announced on Friday.
In May, Trump unexpectedly announced a 5% tariff on all Mexican imports unless Mexico took decisive action to tackle border issues.
"I am pleased to inform you that The United States of America has reached a signed agreement with Mexico. The Tariffs scheduled to be implemented by the US on Monday, against Mexico, are hereby indefinitely suspended," he said on Twitter.
"Mexico, in turn, has agreed to take strong measures to stem the tide of Migration through Mexico, and to our Southern Border. This is being done to greatly reduce, or eliminate, Illegal Immigration coming from Mexico and into the United States."
Mexican Foreign Minister Marcelo Ebrard said in a tweet: "There will be no application of tariffs by the US on Monday. Thanks to all the people who have supported us, showing Mexico's greatness."
The announcement came after officials from both countries held a third day of talks at the US State Department, negotiating over Trump's demands. The talks were reportedly focused on making it harder for Central American migrants to pass through Mexico and claim asylum in the US.
In recent days, Mexico had increased measures against migration. Two migrant caravan leaders were arrested, hundreds of people were deported and 26 people suspected of involvement in people smuggling and the organization of caravans had their bank accounts frozen.
After Trump's announcement, the State Department said Mexico will take "unprecedented steps" to "curb irregular migration," including deploying its National Guard along its southern border.
It added that Mexico "is also taking decisive action to dismantle human smuggling and trafficking organizations."
The US will send asylum-seekers back to Mexico as their applications are processed.
- June 08, 2019
Email ThisBlogThis!Share to TwitterShare to FacebookShare to Pinterest