Do you think kids should be encouraged to stand up for themselves when they are bullied? There will always be a bully who picks on other kids and makes their lives a living hell. Kids,as innocent as they look, can be really mean and I'm putting it mildly. I have seen kids bullied by their peers to the point where they took their own lives. Bullying can come in different forms. It can be name-calling. It can be physical abuse or threats of physical abuse. It can even be online trolling. 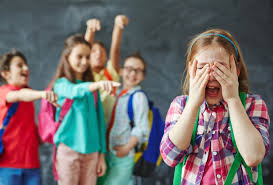 Back in the day in elementary school, I used to bear my grandfather’s name “Dawa” until my classmates bullied me into hating the name. They”d call me “dawadawa” whilst covering their nostrils as if I stank. “Dawadawa” is a northern flavouring made from locust beans and it has an offensive smell. I hated the name so much that I pestered my dad to come to my school and tell my class teacher to take it off the register. I wish I hadn’t done this because I later grew to love the name but it was too late.

My parents knew I was being bullied at school but they did nothing about it. They only told me to ignore my bullies and that for me, wasn’t enough encouragement.

My elder brother had his fair share of bullying too while growing up. Our neighbour’s son was the bane of my his life and a thorn in his flesh. He would beat my brother every now and then and my brother would come home crying. My brother literally lived in fear of this kid. They were age mates, of course, but the boy had an athletic build while my brother was skinny. Whenever I saw my brother running like some wild animal, I’d see the kid in hot pursuit. Let me coin one of Pete Edochie’s proverbs, “ Whenever you see a kid running in the day, it’s either he is pursuing something or something is pursuing him. This proverb encapsulated my brother’s life. He was always being chased, as Tom would chase Jerry in the popular cartoon series “ Tom and Jerry” and my father was irritated by it. He felt my brother shouldn’t be chased about like a rat by a boy his own age, so he devised a plan: whenever the kid chased my brother home again, he would throw my brother out and shut the door.

One day, the kid chased my brother home and unluckily for my brother, my father was at home. Suspecting that my brother was being chased again, my dad peeped through the window and saw the kid standing outside. He held my brother by the hand, dragged him to the door and threw him out, then he shut the door. It was like handing a thief over to an angry mob to be lynched.

They stood face to face staring at each other. My brother was stuck between the devil and the deep blue sea. He had two unpleasant choices: summon the courage to fight or be beaten to a pulp. The kid inched forward and pushed my brother and my brother retaliated. The started wrestling and surprisingly, my brother beat the kid mercilessly. That incident marked the beginning of his freedom; freedom from harassment and torture. He faced his worst nightmare and won.

I do not subscribe to my dad's actions and Iwon’t take such a drastic decision if I feel my child is being bullied and I definitely won’t encourage my child to fight unless he/she is cornered and it’s a life or death situation. Would you have handled the situation differently if you were in my dad’s shoes?
- November 16, 2019
Email ThisBlogThis!Share to TwitterShare to FacebookShare to Pinterest
Newer Post Older Post Home