Mass Protest in Belarus ( A Lesson for Nigerians) 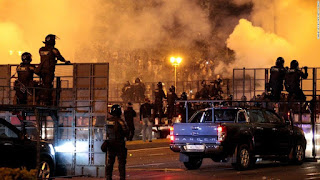 Protests have erupted in Belarus, the only country in Europe under a dictatorship. The protests were occasioned by the outcome of the recent presidential election that pitted the incumbent against the wife of the former presidential candidate.
Following announcement that President Aleksander Lukashenko had won a fourth term in office, protesters thronged the streets to denounce the results and call for the president's resignation. Scores of protesters have been arrested, but the opposition is undeterred.
When people know their rights and yearn for freedom, they go all out to defend it. Some people cherish their freedom so much so that they are willing to put their lives at risk to defend it. This is the opposite of Nigerians, unarguably the most oppressed people on earth, do.
Nigeria has the hallmarks of a failed state. The economy is in recession, bandits and Islamic terrorists have a field day maiming, looting and killing, taxes are being raised here and there in a time when it's ill-advised to do so.
The Nigerian government has inflicted untold hardship on the people, but so far, it has gotten away with it. Other government around the world are financially propping up businesses to keep them afloat, but the opposite is true in Nigeria. The government is burdening businesses and households with taxes at a time when tax relief is needed.
What Nigerians endure would cause massive crisis in other countries. The people are docile and apolitical and they let their government get away with incompetence and mind-blowing corruption.
What is happening in Belarus should serve as a wake up call to Nigerians. The excesses of the government can only be curbed if the people know their rights and forcefully demand they are not trampled on. Until the people take to the streets in protest, the exploitation, humiliation and suffering they endure will only continue to exacerbate.
A nation of 200 million people should live up to its defacto name as the 'giant of Africa" and be a beacon of hope to other African countries. The Nigerian people must borrow a leaf from Belarusians and protest until concrete changes are made. The status quo that benefits a select few must stop. And it won't stop until the people make their voice heard and demand it stops.
- August 10, 2020
Email ThisBlogThis!Share to TwitterShare to FacebookShare to Pinterest