Two Reasons Why People Avoid You

Have you ever wondered why people avoid you like the plague? It may not be because you did something horribly wrong. There are a multiplicity of reasons why people would want to avoid you, but I deemed it wise to give only two reasons so the article isn't too long. 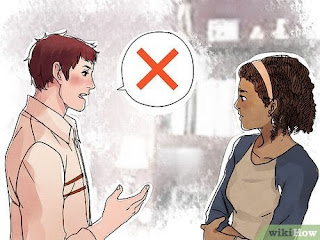 1. Your personal hygiene can make or break you - if you don't know okhow to take care of yourself, don't be surprised when people avoid you. A lot of people are easily put off by bad smell. Some people have very poor oral hygiene that their mouths always give off an offensive odour. You need to learn to take care of your mouth so you don't torture people with your bad breath. It's surprising that some people don't know that they should clean their tongues when they brush their teeth. It's even more surprising that a lot of people don't know that they should brush their teeth twice per day: after breakfast in the morning and before going to bed. The plaque that forms on your teeth also forms on your tongue. The whitish stuff that forms on your tongue is what is responsible for bad breath. You can use a tongue cleaner to get rid of plaque on the tongue or a tongue brush or a very good brush. Brush your tongue very well until the gunk comes out.

Also, the toothpaste you use matters. I used to use an Oral-B Pro Health toothpaste, but I upgraded to Longrich toothpaste. The former is 600 naira, while the latter goes for 1800 naira. Use any of these toothpaste for the freshest breath, and people will flock around you.

2. Don't expect people to flock around you if you are not successful. Success is the magnetic force that pulls people to you. Have you ever seen a rich person who doesn't have friends? The answer is a resounding no. Make yourself the sort of person that people would want to be identified with.  Everyday I see how people fawn over DJ Cuppy on social media. She trended on social media just because she swore allegiance to a different club when her club experienced a string of defeats. The reason for her popularity isn't far-fetched - she has a billionaire dad and she has carved a niche for herself as a DJ. Now, ask yourself this question, " Who would care if I stopped supporting Arsenal, Chelsea, Barcelona, etc?" The truth is, nobody would care because you are not important in the scheme of things.

Make yourself relevant. You don't even have to be rich to be relevant. Strive for excellence and you will enter the hall of fame. Wole Soyinka isn't rich, but his words carry a lot of weight. This is because he excelled in his chosen profession and won the coveted Nobel Prize for Literature. Be successful in what you do and people will gravitate towards you.

- September 03, 2020
Email ThisBlogThis!Share to TwitterShare to FacebookShare to Pinterest